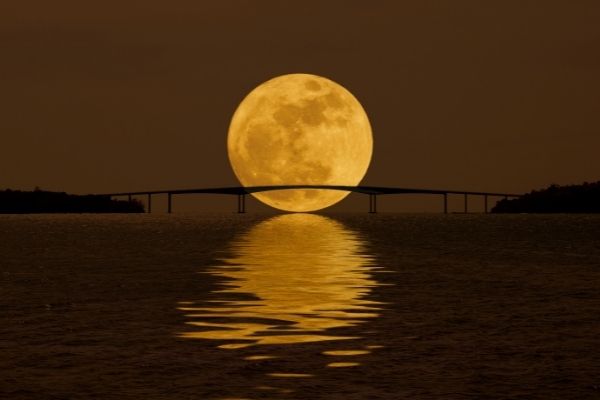 The moon has been mystifying us for centuries. Even today, we are still learning new things about our favorite celestial body.

Did you know that the moon affects fishing?

Believe it or not, science has shown that the moon does have an impact on fish behavior.

In this blog post, we will explore the scientific evidence that supports this claim and discuss how to use this information to your advantage when fishing!

How Does The Moon Affect Fishing? Physiological differences among fish species may explain what happens within the marine environment when it changes to the lunar phase. Prey fish will dive deeper to avoid the full moon’s light, while predator fish can spend longer in deeper waters.

The lunar cycle might also affect fish eating habits. Smaller baitfish will be more active, while larger fish will be less so.

The moon can have different effects on different types of fish, but in general, it is thought that the full moon causes fish to be more active.

Anglers can take advantage of this by fishing during the full moon phase.

If you want to avoid the crowds, though, fishing during the new moon phase might be a better option for you.

Either way, being aware of how the moon affects fishing can help you plan your next fishing trip!

So there you have it! The next time you’re planning a fishing trip, keep in mind how the moon might affect your catch.

The moon has a very real and tangible affect on fish feeding patterns.

For example, studies have shown that fish tend to feed more at night during a full moon.

This is likely because the increased light allows them to see their prey more easily.

So, if you’re looking to do some night fishing during a full moon, you may be in for some good luck!

The moon also affects tides, which in turn can affect where fish are swimming. If you’re fishing from shore, pay attention to the tide chart and try to fish during high tide.

This is when there will be more water covering the area you’re fishing in, and thus more chances of finding fish. Low tide can often expose areas of sand or mud that don’t hold many fish.

Of course, the moon isn’t the only factor that determines how successful your fishing trip will be.

But it’s definitely something to keep in mind the next time you’re planning a fishing trip! Who knew that science could be so useful for such a fun activity?

What does this mean for fishermen?

If you’re looking to increase your chances of catching fish, pay attention to both the moon phase and the tide chart before heading out.

And don’t forget to have fun! Fishing is supposed to be enjoyable, after all. The more you relax and enjoy yourself, the better your chances of success will be. Good luck!

What is the best time to fish on a full Moon?

Fishing is best done at night and morning, and in the evenings on days preceding and following the fishing moon.

This time of month shallow fishing is even better. It makes sense that saltwater fish will react to ocean tides due to moon fishing.

However, the phases also have an impact on freshwater fish as well.

The moon has a direct impact on the tides, which in turn affects fishing. But did you know that the moon also has an effect on fish behavior?

Fish are more active during certain phases of the moon, making them more likely to bite.

Understanding how the moon affects fishing can help you be more successful when you hit the water.

The time of day is not the only factor that determines when fish will bite. The phase of the moon also plays a role.

Certain phases of the moon trigger spawning cycles in fish, which make them more active and more likely to feed.

In saltwater, full moons often see an increase in catches due to higher tides and increased activity from predators hunting at night.

In freshwater, the new moon is often the best time to fish as fish are more active during this phase.

Knowing how the moon affects fishing can help you plan your trips and increase your chances of success.

So next time you head out on the water, be sure to pay attention to the phases of the moon and plan accordingly!

How does the moon affect fish?

The moon’s light can move fish in saltwater or freshwater, but the gravitational effects of its gravity are only felt in the sea, where they are known as tides.

Tides are caused by the ocean’s “swelling” due to daily changes in earth’s orbit relative to the moon. The moon’s gravity also affects the orientation of a fish’s body.

The moon can affect fishing in both positive and negative ways. For example, during a full moon, the extra light can help fisherman see their prey more easily.

On the other hand, some fish are more active at night, so the increased light may cause them to be more cautious and less likely to bite.

In general, though, the moon does have an effect on fish behavior.

So if you’re looking to increase your chances of success next time you go out fishing, pay attention to what phase the moon is in and plan your trip accordingly!

Is Fishing is good when there is a full moon.

The moon at its fullest brings in more tidal water during rising tides. If you are an angler looking to catch a big fish, extra water is a great thing.

The downside to this is that everyone else knows it too, so the good spots will be more crowded.

During a new moon, the water recedes during low tide, which can uncover fish-holding structure like reefs and drop-offs that are usually inaccessible.

This makes for great fishing if you know where to look. The problem is that not many people do, so you may have the spot to yourself – but good luck finding it!

The phases in between full and new moon have less of an effect on fishing, but as a general rule, the darker the night, the better your chances of success.

That’s because fish tend to feed more at night when there is less light. So if you’re looking for an edge, fishing during a moonless night might just give you the advantage you need.

So there you have it – the next time you’re planning a fishing trip, be sure to take the lunar cycle into account. It could make all the difference in your success! Until next time, tight lines!

The moon has different phases, which can be helpful to know when planning a fishing trip.

The new moon is when the moon is dark and invisible in the sky. This is not a good time to fish, as fish are more difficult to find.

The next phase is the waxing crescent, where the moon is visible in the sky and gradually getting larger.

This is a good time to fish, as fish are more active during this time. The next phase is the full moon, where the moon is big and bright in the sky.

This is not a good time to fish, as fish are less active and more difficult to catch. Finally, there is the waning crescent, where the moon gets smaller each night until it is dark and invisible again.

This is a good time to fish, as fish are more active during this time. The moon phase can have a big impact on fishing, so it is important to keep this in mind when planning your next trip!

What are the most significant phases of the moon?

The New Moon occurs when the sun and moon are in alignment.

The first quarter is when the moon is one-quarter of the way through its cycle. The full moon occurs when the sun and moon are in opposition.

The last quarter is when the moon is three-quarters of the way through its cycle.

So, how does this affect fishing?

During a new moon, fish tend to congregate nearshore around structures like reefs and wrecks because they’re drawn to the baitfish that are attracted to these areas. As the lunar cycle progresses and we approach a full moon, fish become more active and spread out as they feed on smaller baitfish that are more dispersed.

Which moon phase is best for fishing?

The best moon phase for fishing is the full moon. This is when the tides are at their highest and the fish are most active.

The next best time to fish is during the new moon, when the tides are at their lowest and the fish are feeding heavily.

Finally, the last quarter moon is a good time to fish as well, as long as you’re careful of stormy weather. So get out there and enjoy some lunar fishing!

Which moon phase is the best for bass fishing?

The best time to catch bass is during the seven-day period when there is a new moon on the fourth day.

Bass are also more active during the week of a new moon, so make sure to fish three days on either side of the full moon.

The 90-minute period between the major and minor periods. The full moon rises most often around dusk, so avoid fishing during this time.

During the new moon, bass will be found in shallow water close to shore where they are feeding on smaller baitfish.

You can fish for them using topwater lures or plastic worms.

On the fourth day after the new moon, the bass will move into deeper water where they will stay until the next full moon. You can catch them using crankbaits or spinnerbaits.

So, if you want to catch bass, make sure to fish during the seven-day period when there is a new moon and avoid fishing during the full moon phase.

What does the moon have to do with fishing?

“Physiological differences among fish species may explain the changes in the marine environment due to the lunar phase.” Prey fish will dive deeper to avoid full moon light, while predator fish can spend longer in deeper waters fishing for food.

“The moon also has an effect on tides, which in turn affects the distribution of fish.” The lunar cycle causes changes in water temperature and currents, which can either attract or repel certain fish species.